0 Utrecht Diaspora around the world

See one of our recent Ireland101 Tribe Gatherings 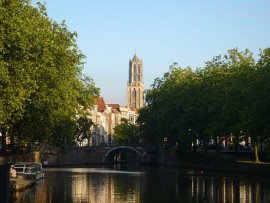 440px-Vanaf_Weerdsluis - By Pepijntje (Own work)
[CC-BY-SA-3.0 or GFDL], via Wikimedia Commons 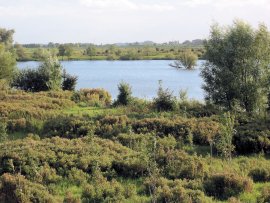 Blauwe_kamer_vanaf_de_Grebbedijk1 - By Rasbak (Own work)
[GFDL or CC-BY-SA-3.0], via Wikimedia Commons 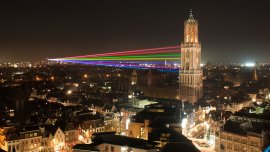 Utrecht, with its capital Utrecht, is the smallest region of the Netherlands, and if you climb the cathedral in the centre of the city Utrecht, you can see most of the region on a good day. Utrecht is centrally located, so there are no beaches, and most people would not go to Utrecht because they are after a scenic holiday in nature. Utrecht is a place to go to for culture, heritage and shopping. Even though there are no beaches, you don't completely have to go without water. There are plenty of canals in the city of Utrecht, and you can enjoy a lovely cup of coffee in one of the coffee shops along the canals.

The one landmark that stands out in Utrecht is the dom tower, which used to be connected to the dom church – but as part of the church collapsed and wasn't rebuilt, there is now a square between the tower and the actual church. The 112m tall tower can be seen from everywhere in the city of Utrecht – which is great for a tourist because it makes it virtually impossible to get lost in the city!

After you visited the dom, you could go and sit down in the cloister gardens next to it.

If you are interested in modern design, then you should book the one hour tour of the Rietveld Schröder House, which was designed and built in the year 1924. It is a great example of the “De Stijl” design by the architect Gerrit Rietfeld. The house is still special today and was added to the list of houses with the UNESCO World heritage status in 2000. If you want to see the inside of the house and don't speak Dutch, then you need to make sure that you book the English tour of the house.

A special aspect of Utrecht is that there are lovely markets every single day of the week. If you go to the centre to the city, you can see the famous fabric market on Saturdays. In various other locations you can see flower markets during different days of the week (the biggest one takes place on Saturdays on the Janskerhof). And then there is the general market of Utrecht, where you can buy virtually everything from fish, flower, bread, fruit, jackets, accessories and also electronics (on Wednesdays, Fridays and Saturdays). Those markets are not only great for buying and browsing, but also for observing typical Dutch markets and how the locals interact on them.

If you are a fan of the character Miffy, then you might also want to check out the Dick Bruna Huis, which is close to the Central Museum, so you could combine a visit to the two different museums, and learn about two very different types of Dutch culture and heritage.

A canal tour is a great way to see the city of Utrecht from a different perspective, and some of the historical facades of the buildings by the canal can only be seen by doing a tour. It's definitely a great way to spend a few hours, and if you go on a guided tour, then the guide will also be able to tell you a lot about the local history.

The biggest castle in Holland is just a short drive outside of Utrecht city. It's name is Kasteel de Haar, and the castle as it is now has been built in the year 1892 (though it took 15 years to finish the project once it was started). The current castle is not the original castle though because there have been buildings on this site since the late 14th century. Over time, the castle had to go through a lot: it went from one family to another, then burned down, was restored, then partially pulled down.

The castle is also surrounded by lovely gardens. The castle itself can only be visited with a guide, but this also makes sense because only with a guide can you really learn everything there is to learn about the history of Holland's largest castle.

Soestdijk Palace used to be the palace of the Dutch royal family. It was built as a summer house in the mid-17th century. It was in use as a residence for the royal family until the prince and the princess both died in 2004. The palace remained empty and unused for over a year. In 2006, the palace was then opened to the public, so you can take tours of the interior and imagine what it must have been like to live in this palace.