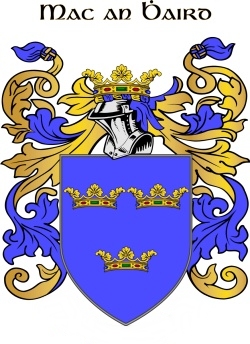 Design your own WARD Family Crest

This surname was found all over Ireland from early times, but mostly associated with counties Donegal and Galway. During later times the name was often found in Dublin.

The most well known sept were perhaps the Wards of Co Donegal, who were bards to the O Donnells. The second sept of the name were of Uí Mhaine, a tribal grouping extending across the modern counties of Galway, Mayo and Roscommon; these were bards to the O Kellys and their territory was around Ballinasloe in Co Galway. Finally, there was a sept in Orghialla or Oriel, which consisted of counties Armagh and Monaghan, extending into parts of Down, Louth and Fermanagh.

Caution with Co Down Wards is required, because the well known family there is of English origin, and is headed by Viscount Bangor. As MacLysaght has noted in his 'Irish Families' series (1982, 1985), 'the arms often ascribed to Irish Wards belong to the Bangors, and do not appertain to the Gaelic Wards'. The same faux pas concerning arms occurs also with Lynch, Kenny, Carey, and no doubt several others, where the anglicised forms of these Irish names is identical to names of Anglo-Norman or later landowning settlers from Britain.

The English surname comes from the Old English word for a guard- 'weard' (pron 'waard').

In Sir William Petty's 'Census' of Ireland in 1659 (incomplete), the Irish name Ward appears as a 'Principal Irish Name' in the following counties:

Co Donegal
There is a BallyMcAward townland in Tirhugh Barony, but no Wards listed in that barony. There are 11 families (all figures are for families) of McAward in Boylagh & Banagh Barony; 6 of McAward in Kilmacrenan Barony.

The returns for Cos Galway and Mayo are missing.

Co Down
Lecale Barony (East Down) Bernard & Nicholas Ward Esqrs (esquires) are listed as 'tituladoes' or landowners of Castleward. This would appear to be the English family (v. supra).

Matheson's 'Special Report on Surnames in Ireland' (1909), listing birth distribution in 1890, shows most Wards in counties Donegal, Dublin and Galway.

Peter Joseph Ward (1891-1970) A Co Donegal Ward. He was a Sinn Féin deputy in Dáil Éireann in the revolutionary period of 1919 -1924. He was pro-Treaty during the Irish Civil War, and joined the pro-Treaty party of Cumann na nGaedheal in 1923, when he was re-elected TD.

William Thomas Ward (1808-1878) American Brigadier General in the Union Army in the American Civil War. Ward led the XX Corps in the Atlanta Campaign, and was commended for conspicuous service at the battle of Peachtree Creek. He also led the brigade in Sherman's 'March to the Sea'.

Tell us about any famous WARD (or surname variant) you think we should add here. We will get our genealogists to check them out and add them to the list. Thanks!

Join the conversation with the WARD tribe

Looking for family of Richard Ward and his wife Mary Carraher or Camaher not quite sure of the spelling they had a son Francis Ward baptized 10-10-1850 in Ardee parish Peter Shield was the priest and sponsored by James Riley and Mary Donnelly. Richard Ward is my ggg grandfather and I am at a stopping point can’t find any info on either of there parents etc,any info would be great.

Is anyone else here a Galway and Midlands Ward? I'm trying to research our history with the wee folk and can't find much except from my grandaddy.

I'm looking for my families Irish Roots, I'm Raymond Ward born in Blackpool, England, My Father was Thomas Bryan Ward born in Manchester, My Grandfather was William Henry Ward ex Manchester, he had 2 Brothers, Tom and Jim and a sister Cissie. There roots were in Ireland but I can't find any information as my granddad was a bit of a rebel and outcast !!

Ward was my Married name. I am looking for my Surname Calligan.

Hi, I am researching the Ward family from Loughborough area, Leicestershire, and would love to hear from anyone who has local knowledge, specifically. Some names in the tree I know are correct are Thomas Ward (1813- 1875) and his son, Thomas Biddles Ward (1838 - 1931) who emigrated to NZ. Judy (19-06-2020)

Is anyone able to share some information about the Wards from Stranorlar, County Donegal?

Ward in Galway I am looking for my family on my fathers side, Galway area. Anyone related to a Martin Gerrard Ward? He has a big family and is son of Anne & John Ward. Please get in touch if a match. Thanks.

I would like to connect with members of the Ward diaspora, in particular, descendants of Samuel Joseph Ward and Norma Brownlee Ward.

(Part 1 of 3) The Ward name can be found in the British Isles, but its origin according to DNA is from the north-west coast of the Emerald Island. The Ward story [dominated by DNA tribal marker R1b-L513, Subgroup A1] can trace their origins to the Finn Valley in Donegal, Ireland from 50 BCE. Perhaps the journey begins with the Clanna Dedad; Deda, son of Sen or Deda Mac Sin. The Ward surname origin is from a Northern Ui Neill [R1b-L513] tribe. The Cenél Eoghan and the tribes of Donegal conquered much of Ulster (Derry and Tyrone).

(Part 2 of 3) Cenél Eoghan will expand across northern Ireland with their cousins Cenél Conaill and the Northern Ui Neill between 500-800 BCE. The clans of Finn Valley have the same DNA as people from Gwynedd in Brittany. But how could this be? Recent discoveries from DNA testing are unlocking the migration patterns of Celtic tribes as late as 800 CE to 1200 CE. The Ward story begins in pre-history Ireland then moves to Scotland as they form part of the Dalriada. Descendants of their tribe will then travel to Brittany, France during the Dark Ages.

Part 3 of 3) Discover their newly found untold story and how forgotten texts bring their story back to life. From the ebook, “The Tribe Within” learn how DNA unfolds this amazing tale and if you look in the right places, how history narrates this evidence. There is another written account of their story, but it is camouflaged in smoke and myth – it will become the tales of King Arthur. Come follow in the footsteps of Deda Mac Sin and visit https://www.smashwords.com/books/view/401207

I am searching for family members who might have knowledge of Michael Ward who boarded a ship in 1840s. Ship stopped in England where the Hudson family boarded. Michael met and married Elizabeth Hudson once they arrived in the USA. I first see them in NY in the 1850 census. He is listed as a flaxdresser. I was told Michaels father had the same occupation and his name was John Ward who was married to Kate Sullivan.

Ward! til the death of me

Areas of Origin for WARD

Write an email address and click 'Invite' to share this page with more members of the WARD tribe.

Discover where the WARD Family members live around the world

Show off the WARD Family Crest…